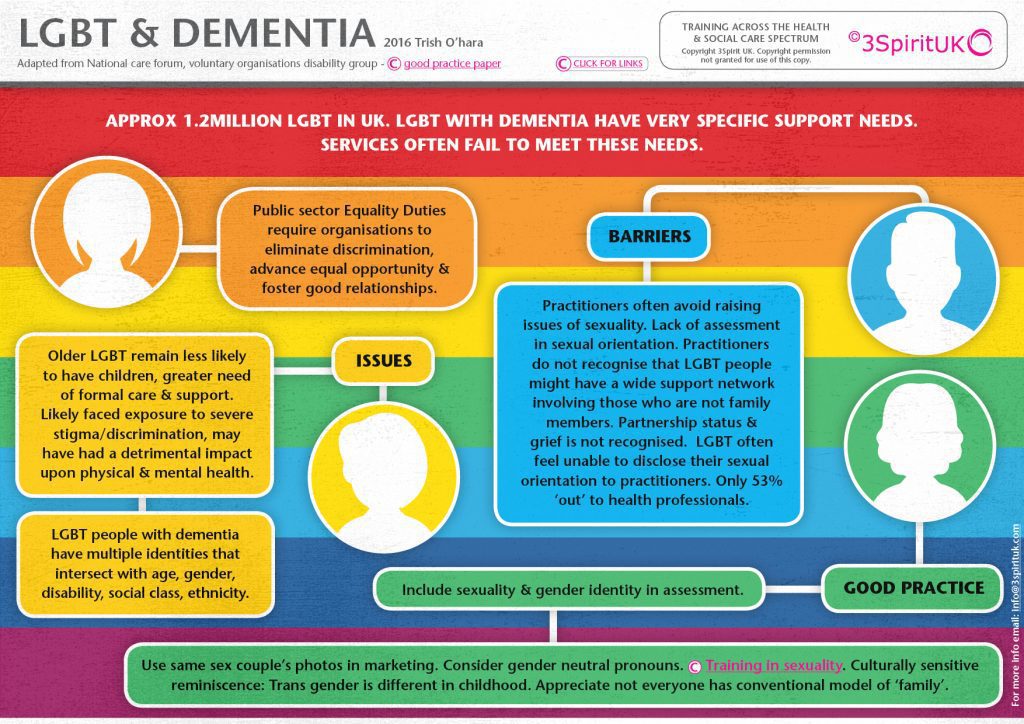 There is an estimated 1.2 million Lesbian,  gay,  bisexual transgender (LGBT) older people in the UK, many of which will have dementia with services often failing to meet  the specific needs.

The public sector equality duties require organisations to eliminate discrimination, advance equal opportunity and foster good relationships for all those using services. However so often the opportunity for older people to even ‘mention’ their sexuality is supressed. It is the role of all social care organisations and leaders of services  to raise hidden issues that silently trample on human rights.   It is essential to push boundaries and to enable the people we work with to honestly reflect on their practice.

The subject of sex is too often ignored when thinking of people in their 60’s,  70’s and 80’s plus.  Many practitioners lack the confidence and skills to know how to raise the subject. Whether we were born in the UK or moved here in our lifetime,  we are still terribly ‘British’ when it comes to the subject.

Some people from the LGBT community have already struggled with higher risk of mental ill health, suicidal thoughts, self-harm and substance misuse and a lifetime of waiting for law to catch up with common sense in order for their rights to be upheld.   It was only in 1973 homosexuality was removed as a mental disorder from DSM and 2013 before same sex marriage was recognised in law.

It is estimated that only 53% of people from the LGBT community have ‘come out’ to a health professional – the remainder may include those that feel their lifestyle choices are nobody else’s business,  but it is possible that many may fear discrimination and keep their mouths and closets firmly shut.   How can we ever tailor services to meet the specific needs and preferences of people from the LGBT community, if they do not feel safe to become visible?

For individuals living with dementia memory problems mean that often individuals have to experience ‘coming out’ twice, into services which are often not prepared, willing or skilled enough to support these needs. The vital work in reminiscence can bring a persons’ history to the fore,  often resulting in the person finding themselves as well as others understanding them better.  However what if,  by bringing a person back to a childhood when they were a different gender results in difficult memories?

The rise in HIV in men over 50 continues, with a much later presentation for health care, and a higher mortality rate than their younger counterparts.  Older men reporting that unsafe sex is still common place.  From this we can presume that unsafe sex is as prevalent across all over 50’s and may have an effect on STI’s in the whole community.   It feels necessary to raise this issue as specific health and social care needs arise from this information and not to only associate HIV to the LGBT community, but also to consider safe sex in our older population. More specifically what role do older people services play, or should play in supporting safe sex?

Older people from the LGBT community remain more likely than both heterosexual peers & younger generations and to be single & live alone. They are also less likely to have children, which means they are more likely to have a greater need of formal care & support.  It would also suggest that where a person with children may be less likely to need residential care, and those without may have a greater need and sooner.   So this would mean that out of the estimated figure of 1.2 million of LGBT older people,  many may be living invisibly in our care homes.      In data collected by  CSCI (now CQC) in  2008 only 7% of care homes and  8% of domiciliary care providers reported carrying out specific work around equality for LGBT,  with less than 1% of care homes who had done any specific work around sexual orientation & assessment or care planning.  With no preparedness or any provision to acknowledge LGBT, it seems living in a care home is similar to living in their closet. Clearly much work is needed to advance this practice.

We need more LGBT friendly care homes, or specific care homes that understand what a gender neutral pronoun is. These flag ship services will embrace all people, regardless of their sexual orientation. More broadly much work is needed around older people and sexuality. Challenges faced with being older; ageism, physical and mental frailty pose problems for meeting sexuality and intimacy needs. A basic and fundamental human need for all regardless of age or sexual orientation. This is essentially about coming back to our core social care roots; promoting person centred care, dignity and inclusion. 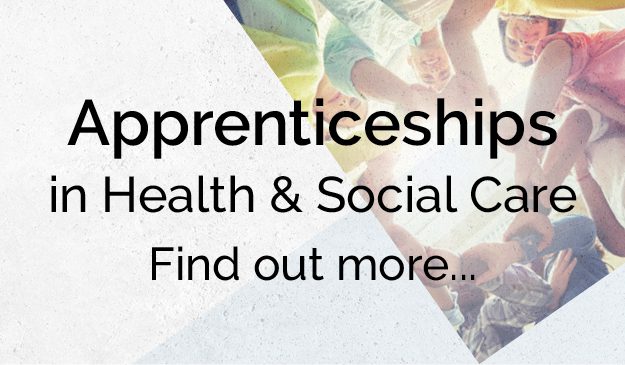 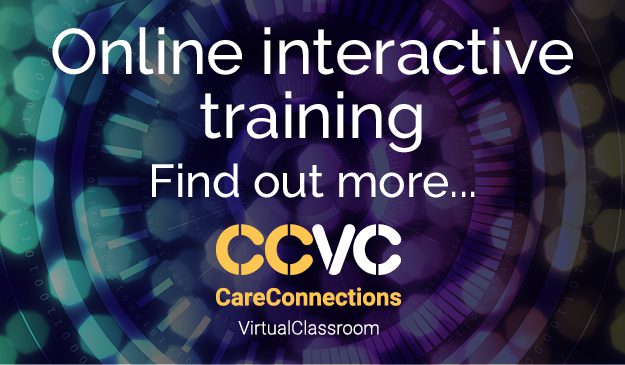 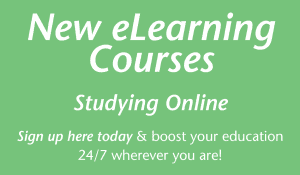